on October 13, 2013
We spent a huge part of our growing up years in Plymouth, Massachusetts. There were the expected chowders, lobster rolls and corn breads, and lots of Italian American markets full of all the Italian food you could think of. But there is also a very vibrant and distinct Portuguese tradition in Plymouth, and it certainly comes through in much of the food we all came to know and love. No trip downtown was complete without stopping at one of the bakeries and getting a linguica roll, a long white yeast roll with chunks of grilled juicy linguica, a Portuguese pork sausage, baked inside. There is also the mysteriously named Baseball Soup, full of kale and rounds of chouriso sausage. It is an item you could get at some restaurants, but probably was more of a staple in many, many Plymouth homes. My Dad got a recipe from the chef at the now-closed 1620 restaurant that was on Samoset and Water streets. Even the chef did not know why this soup has the name it does. I have recently asked a lot of Plymouth natives and there is no real answer (yet!). I have just had a great discussion on facebook with lots of Plymouth friends, some who have grown up with this soup. The reasons for the name include "you can THROW anything and everything in it, including a baseball." Many friends commented that their grandmothers and mothers explained it that way, and it was also called "garbage soup."Another likely one is "They sold this before baseball games in Plymouth, so the non-Portuguese customers nicknamed it baseball soup."  A couple other good possibilities are that it comes from the Portuguese word "curves,"  which is the local word for kale/green (I think it may be a more regional word for kale, meaning curvy, curly)  And yet another reason given is because when made with potatoes, the potatoes looked like baseballs. But I have to add the best comment from my friend Michael Eric Pereira's dad:

"Only heard that expression in Plymouth. Since it is an English word which has nothing to do with Portugal or Brazil, I imagine it is word play made up by who? That means throw all the leftovers in. Also had plenty of soup growing up at home and at the feasts all with their own names. Baseball was baseball, not soup."


Mr. Pereira, who is in his 80s, grew up in New Bedford, MA, which has the largest population of Portuguese people outside of Portugal, and he never heard the name there, only in Plymouth. So I do agree that this is very likely a Plymouth-only name! How cool is that?

Variations include using potatoes instead of pasta; adding red kidney beans and the liquid from the can; and also a version with short ribs. I love it!
I know my Dad attested to the authenticity of this recipe in matching the one served at 1620, but I also believe this soup probably took on many versions home to home. This recipe calls for linguica, but I used chouriso, which is similar, but a little spicier. I was able to make this with the real thing because my friend Art Guertin from Plymouth recently sent me a care package of Portuguese sausage. So here is the recipe as my Dad collected it, a staple in Southeastern Massachusetts, even without the Plymouth name:

In the bottom of a heavy kettle, add oil, and saute the onions and carrots until softened, about 5 minutes. 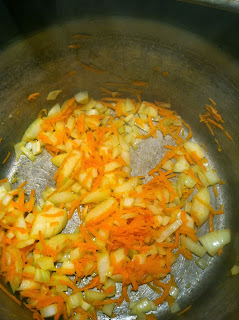 Add the garlic, salt, chicken broth, kale and linguica. Add pepper to taste. The kale will shrink down pretty quickly. 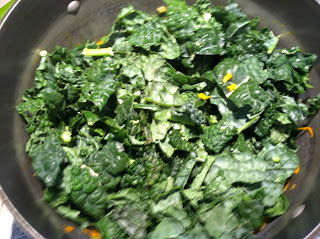 Bring to a boil, cover and simmer for 30 minutes. Stir occasionally to make sure the kale is cooking down evenly. 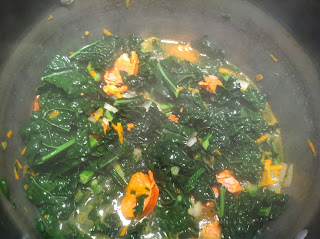 In the meantime, cook the dried pasta. When the soup has simmered for 30 minutes, add the cooked pasta and the crushed tomatoes, stir, heat through and serve.