on November 22, 2012
I posted some pie recipes earlier last week, as I started thinking ahead about what I wanted to cook this year. Pie is always a major part of Thanksgiving. In fact, I often made a huge amount of them before heading over to Plimoth Plantation to spend a shift Thanksgiving day telling people we had our harvest fest a month ago, and this was not when the pilgrims would have had their fall feast. At home, we always had lots of hands to cook, and lots of friends who brought more. I am not in anyway claiming to have made all the pies, but they were my favorite to make, and so I made a lot. I remember one year making a dozen full sized pies before heading off to challenge people's Thanksgiving perceptions. I must say I enjoyed both activities. 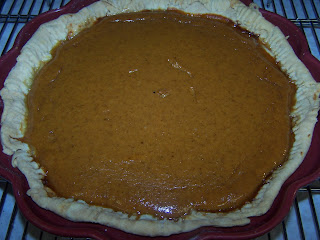 And like years past, today we have a wonderful treat coming with a guest. Sara's roomate is bringing an eggnog pie. YUM. I made a traditional pumpkin pie this morning and opted for a cherry fruit pie with a secret layer of diced mixed fruit (cocktail ;-) in the middle. I topped it with a crump topping studded with dried cranberries. 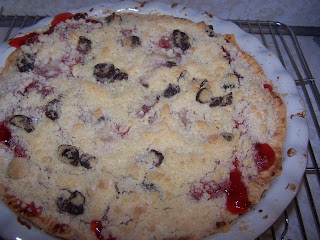 I will also readily admit that in years past, I have been more than happy to use rolled-and-ready pie crust. However, because I recently was shocked to see most major brands use lard (which makes a wonderful crust, but renders a pie inedible to vegetarians) I am making my crust from scratch again, using butter. Ironically, in my teenage years cooking at home and at work, we always made homemade crust, even if the filling was more packaged and premade. As an adult, I usually make my fillings from scratch. I think I got out of the habit of making my own crust when I lived in Tucson and the dry air made it very challenging.

I have made many versions of pie crust, this one is super easy and should work well for anyone. The trick is to not get the shortening or butter too small, and to have the water very, very cold.

Flakey Pastry Dough (recipe adapted from Farm Journal's Complete Pie Cookbook, a fabulous collection if you can find it)

Put flour in a mixing bowl with the butter, cut into smaller chunks). Add salt and pinch the butter with the flour using your finger tips until you get a coarse crumbly mix. Add the water a couple tablespoons at a time. You want just enough to allow the crust to hang together in a ball. At this point, handle the dough as little as possible.  Divide into two balls.

Lightly flour your counter or work surface and roll out dough to about a 10 or 11 inch circle, and use according to your favorite recipe. This makes a nice flaky crust.