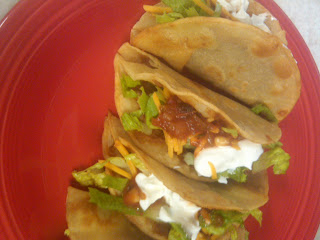 OK, there should be a chorus of angels and a heavenly light shining down from golden tinted clouds, some bare assed cherubs (or ten) . . .

and quite honestly, I am a bit reluctant to attempt to reduce the deetz bean taco to a mere recipe. It will not do it justice. It is not a recipe, has never been a recipe, but presented here is a germ of an idea so that each and everyone of you can start perfecting your own bean taco.

I can not imagine how many bean tacos have been made by deetzes through the years. My previous post illustrated a single night when deetz hands produced ONE THOUSAND BEAN TACOS! If I was told we have made over a million of these in our life, I would say "yeah, probably."
﻿

So lets start some basic math, on some very general assumptions. Starting when I started High School, 1970, was about when tortillas and refried beans became common enough to make them a weekly meal. We usually made at least 7 to 8 dozen a meal, lets say conservatively once a week. 8 x 12 x 52 puts us at just shy of 5000 tacos a year. Times 20 years, as the household made the same sized meals until about 1990. That's 100,000 tacos. Just in household number one, my mothers. And that's only considering two decades. AND some times we made more, rarely less, sometimes we had them for breakfast-lunch-and-dinner. BUT . . .  we had deetzes making them in their restaurants, and deetzes making them at college, and deetzes making them for parties, and grandkids and nieces and nephews . . . .  so yeah, one night last year when I made a total of 3 bean tacos, it was like the world imploded. Real Surreal . . .

So, I have been urged to add the bean taco recipe here. I will give some broad strokes and send it out into the world to become someone else's bean taco, however they decide to craft it. (deetz siblings are groaning right now, "no, no, NOOOOO . . .  ok, lets see if I do them that way . . . "

* check out sister Cricket's great tip in the comments, and the attribution to Sue Owens for the original recipe. Roger and Sue and family are longtime friends of the deetz clan.

1 dozen corn tortillas (I prefer white corn ones, my go-to is mission, as they do not soak up the oil too much)
wesson vegetable oil
1 small can refried beans
garlic powder

garnishes of your choice, lettuce, tomatoes, etc., suggestions below.

In a good sized skillet, heat enough wesson oil to cover the bottom of the pan by about 1/4 to 1/2 inch. You should get it to about 375 degrees (I only say this because I did it in an electric skillet to see how hot it should be).

Set up a draining rack with paper toweling for the tortillas, and once the oil is hot, pass each tortilla through the hot oil, for about ten seconds or so, turning once, and drain. The oil should be sizzly but not popping or smoking, the tortilla should puff and bubble up some and stiffen a little, not be limp and oily.) Keep the tortillas flat and drain/blot all and move on to the next step. (Take the oil off the heat between steps.)

Spread some refried beans on one side of a cooked tortilla, and sprinkle with a little garlic powder. (My niece Marilyn showed me how she adds a little green box parmesan). Fold over and press shut, avoid any loose beans around the edges. 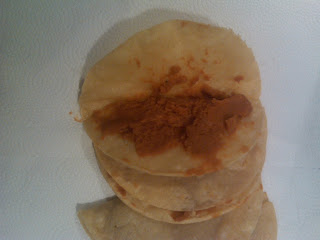 Once all the tacos are filled, line your draining rack with more paper towels, and heat the oil back to about 375 degrees. You may need to add a little to keep the level up. Fry the tacos, letting the oil sizzle around them, crisp them up, but not too browned. Turn over to cook the second side. You want little blisters on the surface, some browning, some crisping, especially around the curved edge.  You do not want the surface of the fat beany-belly-bulge to be soft and oily, it should also crisp up, just not quite as much as the edges. You should be able to open the tacos to add stuff without it splitting in half. 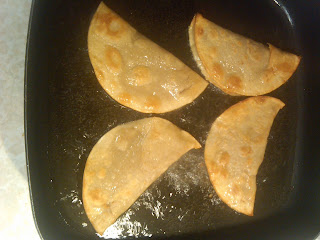 Will you be able to make deetz bean tacos from this recipe? Hmmm. I do not know. BUT you can work with this method and make them into your favorite. MAKE THESE YOUR OWN!

And like all my recipes, you can change them up. Use refried beans with some whole beans stirred in (I wouldn't heat the beans up, they will get too runny and ooze into the hot oil), or add some queso fresco to the beans before the second fry, just keep it all tucked inside. You want a crispy but not too flaky taco shell around creamy hot beans, and anything else you want added in. Drain them well, and if you get your oil to just the right temperature, they won't be oily.

AND stay tuned for any deetz variations my siblings may want to add . . .
family southwest vegetarian