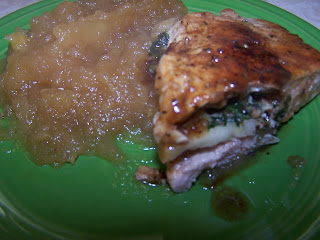 One of my favorite things to do is to just see what's in the cupboards and crispers and make something up. I commute into DC most weeks, and so I cook up a host of meals to leave at home, and to schlep along for my own meals during the week. I had some extra uncooked boneless pork loin chops left from another meal, so as I was tending the applesauce pot, making something from the pork made a lot of sense.

I started with what I found in the fridge, a small amount of fresh baby spinach and a scallion and some celery. I sauteed the vegetables in olive oil with a little garlic, and as soon as the spinach was wilted, I added some dry plain bread crumbs, salt and pepper. I wanted some color, and a little more flavor, so I added a couple pieces of marinated fire roasted peppers, diced.

I had three pork loin chops, boneless (maybe not as thick as I would have liked), I cut pockets into them and seasoned the interiors. On each one I placed a very thin slice of Fuji apple cut in two pieces to fit better, and then layered some of the stuffing on top. I secured each side with a toothpick and seasoned the outside of the chops with salt, pepper and garlic. 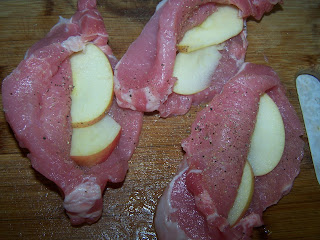 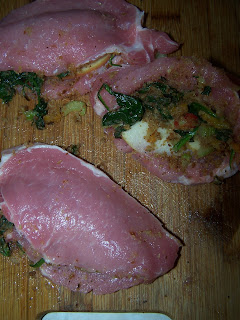 In a large skillet, I heated some garlic and olive oil, and browned both sides of the chops. Then I added some apple cider and a splash of white balsamic vinegar to deglaze the pan and also create some steam. I covered the pan and let it simmer until the chops were cooked. This made a wonderful pan sauce, and the apple slices were softened but still crisp, and countered the savory flavors in the spinach filling very nicely. REMEMBER TO REMOVE THE TOOTHPICK and serve. 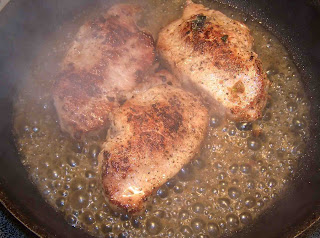