on December 09, 2012
I have recently made many of my standards and wanted something a little different. My dad used to make a great version of stuffed peppers, but instead of the usual ground meat and rice filling with tomato sauce, it was a garlicky pork in cream sauce served inside pretty colored peppers. I took that idea, and to make the dish lower in fat, and appropriate for the non-pork eaters in my household, I opted for something in between, a ground chicken and vegetable filling with a creamy sauce to hold it together. (Plus then I didn't have to think about where that recipe may be and how long it would take me to find it.) I also had some large tomatoes, so I hollowed one of those out to fill and add some variety.
Stuffed Peppers
4 bell peppers of your choice
1 lb. ground organic chicken
1/2 onion, diced small
1 medium carrot, peeled and diced
1 clove of garlic. minced
A handful of fresh parsley
4 Tbl. olive oil
4 Tbl. flour
1 cup of low fat milk
4 cups fresh baby spinach leaves
1 scallion, sliced thin
Salt and pepper to taste
Some dry bread crumbs and parmesan cheese, mixed, enough to top the peppers (maybe a cup in all?)
In a medium saucepan, boil some salted water to blanche the peppers. This will partially cook the pepper so you get a nice texture once it is all baked.
While the water is heating, heat the olive oil in a skillet and saute the garlic, onions, carrots and parsley. Add the ground chicken and cook, breaking apart, until cooked through.
Add the flour by sprinkling it over the top of the meat mixture. Stir well, and add the milk. Stir until thickened, and add the spinach, scallions and salt and pepper to taste. Spinach will wilt quickly and the scallions don't really need to cook much. 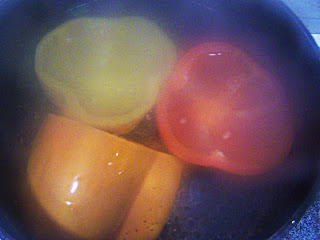 Cut the tops off the peppers and pull out the seeds and the white ribbing. When water has reached a boil, submerge the peppers into the water and simmer for about a minute or two. Drain, salt and pepper the interior, and place upright in an 8x8 baking dish.
Top with the breadcrumb/parmesan mixture and drizzle with a little olive oil, salt and pepper to taste. Place in a 375 degree oven and bake for about 15 to 20 minutes, or until the breadcrumbs on top are crusty and golden brown and the peppers are starting to shrink in a little bit.
You could adapt this to a vegetarian recipe really easily by adding more substantial vegetables and eliminating the meat, maybe use some broccoli or other favorite. You could make this vegan by using vegetable stock in the the sauce and avoiding the suggested butter and parmesan.
chicken easy-to-adapt-to-vegetarian