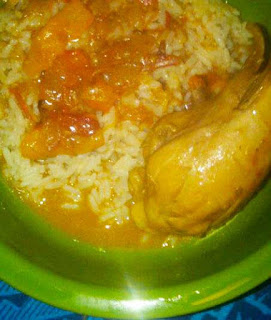 This recipe is another wonderful one from the cookbook my dad put together for family gifting. He spent a lot of time in South Africa, and logically came away with new influences and new things to introduce to all of us. This one peaks people's interest (or maybe grosses them out a little), especially when you describe it and get to the "add peanut butter to the chicken" part. But it is tempered with spices and broth and vegetables, and is quite mellow. And when you think about it, we have lots of familiar savory dishes we like that use peanuts. Satay is a great example, as is peanut soup, a Tidewater favorite. It is wonderful served over mounds of steamed rice.

I believe that originally when my dad started making this, he did it with whole pieces of chicken (legs and thighs), and I also remember that it was supposed to be finished off with the addition of some spinach, which he didn't like so he omitted it. The following recipe is the way he has it typed in his cookbook, and I will note where I made variations.

This is a wonderful dish to make ahead of time, and for any gathering where people serve themselves throughout the event. We have had this at my dad's for christmas day, served it at multiple parties, and honored him by serving this at his post-funeral gathering in Williamsburg, Virginia in 2000.

2 medium onions, finely chopped
2 Tbl. butter
2 cloves garlic, chopped
1 tsp. salt
1/2 tsp. black pepper
1/2 tsp. cayenne
2 bell peppers, seeded and cut into 1" squares (I used cut up red and yellow peppers)
2 lbs, boneless chicken breasts, cut into cubes (Here I used 4 lbs of chicken legs, skin on)
3 to 4 fresh or canned tomatoes (I used a box of ripe cherry tomatoes, quartered and smashed, including all the liquidy pulp and seeds)
2 cups of water (I used four cups of water)
6 Tbl.  peanut butter (I used 12 Tbl. because of the additional chicken and liquid)     (Try to find a natural creamy version)
Some chicken stock or water to thin out as needed to taste

In a large skillet, saute the onions in the butter, until golden brown. Add garlic, salt, pepper, and cayenne and stir for a couple minutes. 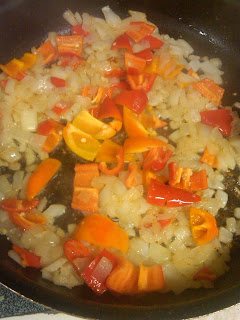 Add peppers and chicken. When all the chicken pieces are nicely browned, add the mashed tomatoes and the water. (At this point, I put it all into a kettle.) Bring to a boil, and then reduce heat and simmer for 10 minutes. 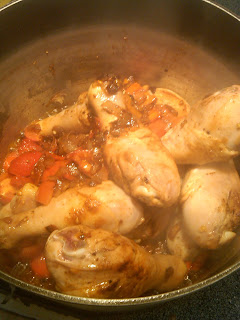 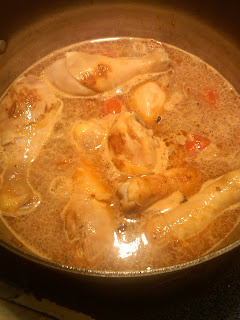 Thin the peanut butter with some of the cooking broth and add to the pot. 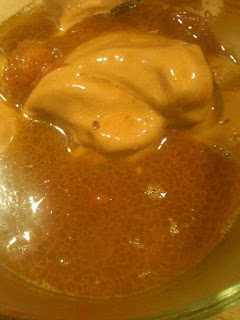 Simmer on low heat until meat is cooked though and tender. (I simmered mine for about another 30 minutes. I checked it about 15 minutes in and thought it was a little peanut buttery tasting, so I thinned it with a small amount of chicken broth, maybe 1/2 cup).

You could concievably make this with lots of peppers and onions in larger pieces and omit the chicken all together. Maybe add vegetable stock instead of water and have a wonderful dish, maybe even adding some of your favorite vegetables, like green beans. Replacing the butter with oil would make it vegan.
chicken easy-to-adapt-to-vegetarian family