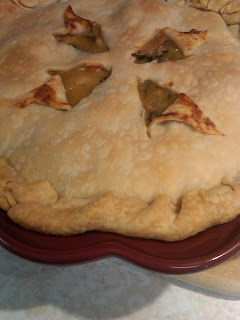 Classic Chicken Pot Pie can be fairly easy, and offer a good opportunity to use up leftovers and stuff in your pantry and fridge. Growing up, we made all kinds of sweet pies, and if we had pot pies, they were those glorious little single servings in a crinkle-sided foil pan. I always dug in from the top, smashing all the crust down into the gravy and filling. My friend Marita tips them out upside down and eats them bottom first. I always wanted a few more bites by the time I was futilely scraping at the foil sides on the pan, knowing there were still little crusty bits just beyond my skill with a fork.
Now when I make pot pies, I make full sized ones, sometimes I cook the chicken just for the pot pie, but it's also a way I use up leftover roast chicken. I have a great crust recipe posted Nov. 22, 2012 "Oh My, Pie!" or you could easily use pre-rolled dough like Pillsbury, although if you don't eat meat or pork, be aware it has lard in it, as do most commercially made crusts. In fact, if you find a vegetarian or even vegan friendly crust, you can easily make pot pie fillings without the meat and replace the butter with vegetable oil and the chicken broth with water or vegetable broth and have a vegetarian/vegan alternative.

Enough crust for a two crust pie (you could do just the top, but why?)
2 Tbl. of butter or olive oil
1 large carrot. peeled and sliced
2 stalks of celery, including leaves, sliced
1/2 large onion, diced
1 clove garlic, minced
4 large mushrooms, quartered
3 cups cooked chicken, chopped (If going vegie, replace with cubed par boiled potatoes and broccoli)
1 cup green beans (I just added these because I had them leftover. You can use frozen or fresh)
1  to 2 cups water or broth
3 Tbl. flour, mixed with 1/4 cup cold water
salt and pepper to taste
2 cups baby spinach leaves
1/4 cup grated parmesan cheese (Kraft is fine)

In a large skillet, melt butter and saute carrot, celery onion, garlic, and mushrooms until onion is wilted and vegetables start to soften. Add chicken, and 1 cup of water or broth.
(I often have those great gelatinous drippings from leftover chicken, so I add some of that too. Let it all simmer, salt and pepper to taste. Take the flour and water mixture and add about 1/2 cup of the hot liquid from the pan into it, making sure you stir out any lumps, add back into the pan, stirring in and bringing to a simmer.
The broth will thicken some, you don't want it too thick as it will thicken a little more in the oven. When your sauce gets a little thickened, throw in the spinach leaves and stir until they are wilted. Add the parmesan cheese, which will thicken it a little more. If it gets too thick, add a little more water or broth. It should be the consistency of gravy, not broth.


Set the pan aside and let the filling cool a little. Then get a pie pan and prepare your crust. (You don't want the filling too hot or the crust will get a little too soft.)
Line the pan with the bottom crust, and fill with the chicken/vegetable filling. Add the top crust and vent. Crimp the edges by rolling and crimping or press together with a fork. 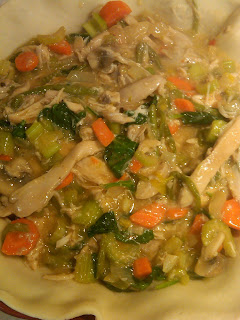 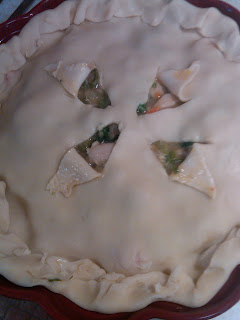 Bake at 425 degrees F for 15  minutes, then reduce the heat to 350 degrees F and bake for about 30 minutes more, or until crust is nicely browned and the filling is bubbly. Let cool for at least 15 minutes before cutting and serving.
chicken easy-to-adapt-to-vegetarian