on August 10, 2013
﻿﻿So all of a sudden everyone on facebook is talking about "tomato pie," (well. a few people). But it was all on the same day and I realized I really never considered anything called tomato pie.﻿﻿

. . . So I asked people for recipes, looked on line, and saw there was a great range in how to fill a tomato pie. I selected one I got from a friend on FB, Sarah Beth Jones, someone who is a kindred spirit and we share many posts and ideas, but have never actually met in person. I am going to try the ideas from Mary Ellen Norrisey Hodges and Mary Reiten as well, all in due time (which means ASAP!).


Sarah Beth's recipe had corn and onions and cheese on the lower layer, topped by fresh, ripe summer tomatoes. I found some really lovely ripe tomatoes and got some other ingredients. I had a premade crust in the fridge, from Trader Joe's (made with butter instead of the very commonly found lard). On a side note, the Trader Joe's crusts come in a roll, between two plastic sheets. I have never gotten them that they aren't really broken when I open them, but I have found if I use my pastry rolling pin on it while it is still in the plastic, it reshapes nicely. So choose the crust of your choice for this, it just needs to be a container for the wonderful fresh tomatoes. Here is what I improvised after reading through SBJ's recipe: 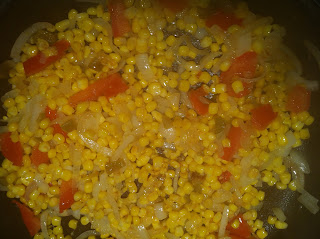 Preheat the oven to 425 degrees F. In a medium sized skillet, heat the oil and saute the onions until they start to caramelize. Stir in the corn, green chiles, and a few of the diced scraps of tomatoes left after slicing them. I saute for a few minutes until the corn starts to caramelize and the tomatoes soften. Salt and pepper to taste.﻿ 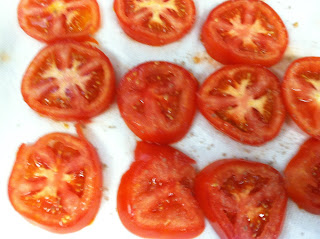 While the corn filling is cooking, lay out the tomato slices on a paper towel, and sprinkle with salt. This lets some of the moisture to be pulled away from the tomatoes.
﻿ 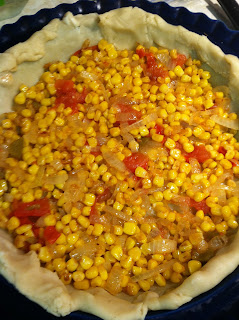 Line a pie plate with the pie crust, and crimp the edges, or fold over the tomatoes once the pie shell is filled. Sprinkle half the asiago over the bottom, and then put the corn and onion mixture on top of the asiago.﻿ 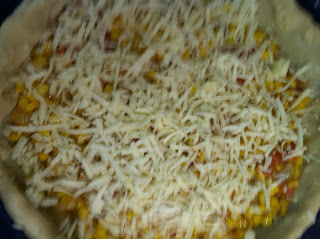 Top the corn layer with the jack cheese, spreading it out evenly, as this will create a sort of gooey layer to help hold the tomatoes down. 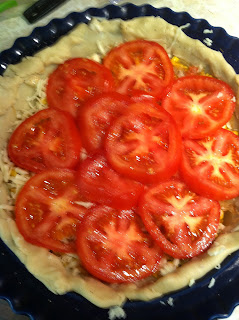 Layer the tomatoes on the top, slightly overlapping to get full coverage. Sprinkle with salt and pepper to taste and any other seasoning you may like.﻿ 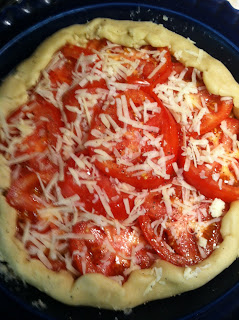 Sprinkle the rest of the asiago over the tomatoes, just enough to add a little interest, not enough to fully cover, because you want this to be more about the tomatoes.

Bake at 425 for 15 minutes and then reduce heat to 375 and bake for about 45 minutes more. I checked my pie at about 30 minutes and saw there was a little more moisture from the tomatoes than I thought would work, so I sprinkled about 1 Tbl. of panko bread crumbs over the areas that looked watery. They absorbed the tomato liquid and added a nice crispy texture over the surface.

Remove from the oven when the tomatoes look slightly shrivelled and the crust is browned and flaky. Let the pie cool a few minutes before serving. Also really good cold or at room temperature.
vegetarian