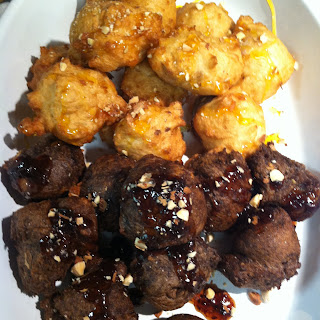 I decided last night that I wanted to make Loukoumades, traditional Greek donuts drizzled in honey and topped with chopped nuts. By the time I woke up, the plan had evolved, and included not only the traditional ones, but a chocolate version with a different sauce altogether. I have made a version of these on other occasions, but I was not in love with the recipe, so I developed my own, and then added some chocolate. What else could make the perfect fried donut better?

The thing I did not like about the recipe I have used in the past, is that it was basically like a stiff pizza dough, and everything I have seen about these treats shows a wet stretchy dough. So I just made a sweet bread dough with less flour, added a little lemon zest, and then halved it, and added some cocoa powder to the second half. This is a pretty close approximation of what I did this morning. All the measurements are exact except the cocoa which I kind of (I am not going to say fudged) threw in willy nilly.

In a medium sized bowl, add yeast, sugar, salt and the hot water, stir to mix well. Let this get frothy for a few minutes. Stir in 2 cups of flour until it makes a very wet sticky dough. (Add a little more if it's too sticky to handle the next part). Put half the dough in a second bowl, and stir in the cocoa until it's well blended. It will mix a little during the short kneading, too

Take each piece of dough and knead them on a lightly floured surface until they are still very soft but don't totally stick to your hands. Set in a greased bowl and cover. let rise for about 30 minutes. I would put them in two bowls, as they got more inflated and stickier, they kind of stuck together) 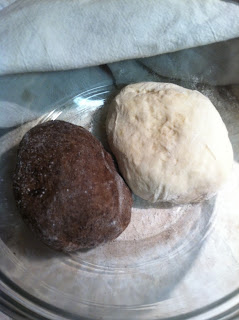 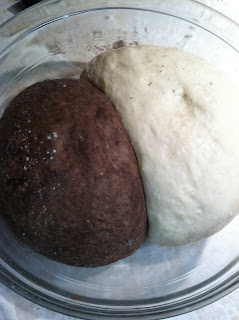 The dough will rise, and get fairly soft and airy. Pull them out of the bowl and set them on a lightly floured plate or surface without deflating the dough. 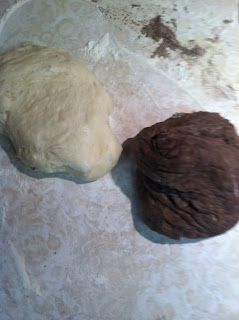 In a heavy saucepan, heat enough oil to allow the donuts to float freely when frying them. Heat over medium high heat until the oil is 350 degrees. You will want a draining area and a slotted spoon. I line a cookie rack with either paper or cloth toweling. 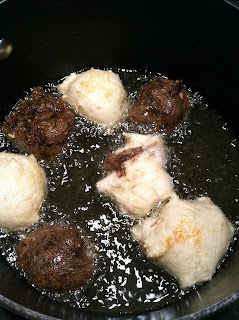 To fry, carefully pull off small walnut sized balls of dough and place them carefully in the hot oil. You can use your hands, or cut the dough with a very sharp knife. I like the freeform shapes that come from doing it by hand, and I think they don't deflate as much. I put plain AND chocolate dough balls in at the same time because it is hard to tell when the chocolate donuts are the right golden color. 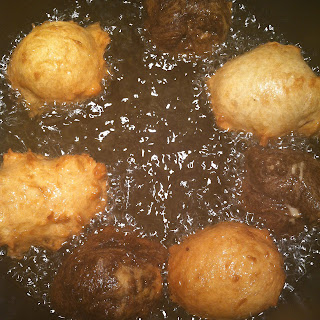 They will brown somewhat quickly, and you will need to roll them over with a slotted spoon or tongs part way through the cooking. They will puff up in the hot oil, so do not crowd the pan. Cook them in batches. 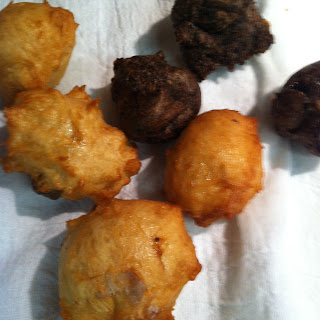 Once they are all cooked, but still hot, place them in a serving dish and drizzle them with honey and sprinkle with chopped nuts. In the case of the chocolate ones, I had some commercially made red wine and fruit sauce which I heated slightly and drizzled over the loukoumades. 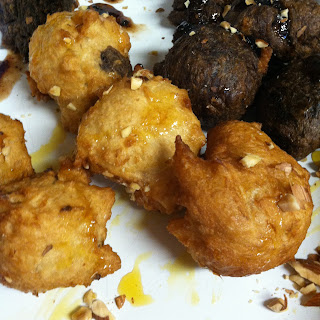 You could even drizzle these with a really nice maple syrup, or toss them in either powdered sugar, or regular sugar and cinnamon. This should make about 20 little donuts. Serve hot.
breakfast desserts and treats Greek vegetarian