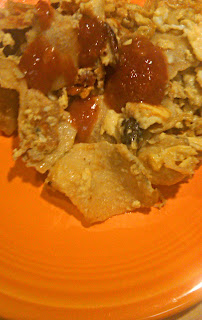 Happy New Year! This morning was lazy, getting up late, having extra coffee. I don't really recall specific NYE celebrations growing up, maybe it was because we had so many parties any day of the week, they all kind of run together in my memory. We have one particular evening the Deetzes all fondly call "egg night" and I suspect that may have been a New Years Eve. The usual suspects included a large number of my dad's students from his native american history class at Harvard.

I know we were all really hungry, as we had been dancing Round Dances and 49s in the living room, which was the usual follow up to our live bluegrass sessions in the early part of the evenings. (I really do not kid when I say this could have been any random night at the Deetz house).

It was winter, and there was a lot of snow outside. My mother decided to cook everyone eggs at about 3 in the morning, and she enlisted a lot of help. She assigned the job of making toast to our very dear Hopi friend, Hartman Lomawaima. At one point the toaster caught on fire and my mother yelled at Hartman to do something, he looked at her, and in his usual stoic manner said "putting out fires is women's work." I would say that comment came as much from Hartman's youth and alcohol consumption that night as it did from his Hopi-ness. He and my mom Jody had developed a great repartee along these lines. The fire was squelched when Charles Cann and Rod Roach ran the toaster outside and dumped it in the accumulated snow on the porch. (I welcome any alternate versions!)

Anyway, after a long holiday season, and lots of fancy meals, it's nice to have a recipe that lets you take bits and pieces of what you have laying around and make a delicious breakfast. AND doesn't require toast.

There are other versions of Chilequiles, but this one uses eggs and corn tortillas. Like any scrambled eggs or omelettes, you can add whatever bits and pieces you like.

Heat the oil in a large skillet. Saute the scallions and peppers until softened, and add the torn tortillas. Fry until the tortillas are golden and start to crisp a little. 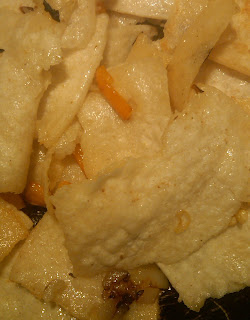 While the tortillas are crisping, crack the eggs into a medium bowl, and salt and pepper to taste. Add the salsa and beat until the eggs are frothy. This gets a lot of air in them.

Lower the heat under the skillet to low/medium low, and pour the egg mixture over the tortillas. Cook slowly like you would regular scrambled eggs, until the eggs are starting to set up. Stir in the black beans and the cheddar, and heat through, allowing the cheese to melt. Salt and pepper to taste. 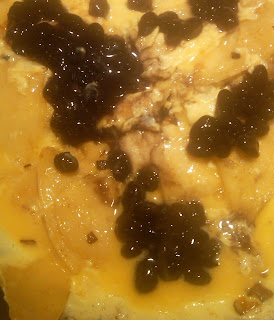 By adding the cheese and beans at the end, you get the eggs evenly set and get a more cheesy taste.
Serve with more salsa.
breakfast family vegetarian