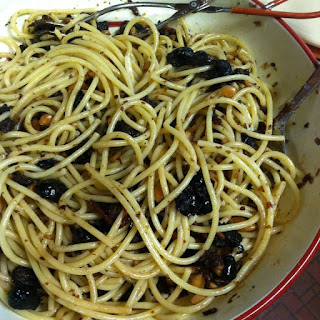 This dish has a much more elegant Italian name, and it is not my recipe in any way, shape or form. I found this recipe in a cookbook called Regional Cooking of Southern Italy, by Marlena De Blasi, who also has a companion book of Northern Italian regional recipes. I like the books because they have a very stylized writing style and include a lot of background and context to the regions and the recipes.
The recipe here, Pasta alle Mandorle e Pomodorini Secchi di Santa Maria al Bagna (Pasta with almonds and sun-dried tomatoes in the manner of Saint Mary of the Bath) is quite different than many pasta sauces, you may actually find it is more of a dressing. I really liked it, and will be using the sauce part as a focaccia topping soon, as recommended by my chef sister Cindy. Cindy lives and breathes this stuff, and she never steers me wrong.

As usual, when I present a recipe from a cookbook, I offer it as it is written and then add commentary where I deviated or improvised.


Step one, I took the orange peel and the garlic and chopped them with a sharp knife continually until they became very small pieces, than I put them in my mortar and pestle and mashed them into somewhat of a paste. (It got juicy and smashed but never really became paste, in my opinion.) 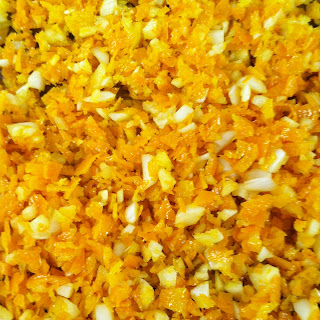 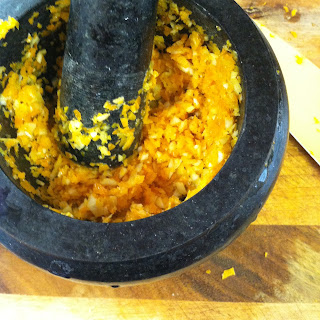 I set this aside and then prepped the almonds, which I needed to blanch, because the store did not have blanched almonds. I had raw almonds in the pantry, so I just boiled them for two minutes, and then drained them, put them on a clean kitchen towel and then rubbed them between the fabric. Most of the skins popped right off, and in fact it was kind of fun. The fresh blanching also created a nice subtle texture in the almonds. Coarsely chop the almonds. 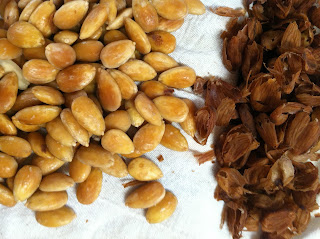 The next ingredient for prepping were the olives, if you buy them pitted, I would recommend tearing them in half so they are a bit ragged. I bought olives with pits, and I found that pitting them with my fingers rather than a knife or a tool was easier and created a nice rough texture. Plus, I could feel if I got the hard pit all the way out. Then I got the sun-dried tomatoes out, and cut them into shreds as best I could, and switched over to kitchen shears. I admit that after they soaked I also took advantage of them being more supple, and I made some of them smaller then. At this point, get all of your ingredients together and prepared for the cooking part, which is super easy. 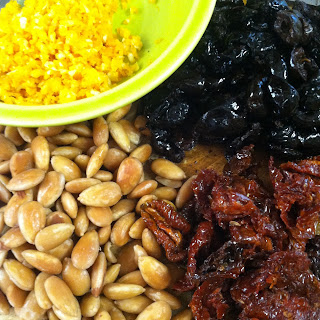 In a large skillet, heat the olive oil, and once heated, add in the almonds, and cook a minute or two, do not allow them to darken much. Then add in the orange/garlic paste as well as the red pepper (I used flakes). Saute them for a couple more minutes, or until you can smell the garlic and the orange oils releasing into the oil. Set aside.

In a small saucepan, heat the wine until simmering and add in the olives and the sun-dried tomatoes. Remove the pan from the heat, cover, and let sit for 10 minutes. This will allow the olives and tomatoes to plump up and absorb some of the wine. Remove the tomatoes and olives with a slotted spoon and simply add them directly to the skillet with the almond mixture. Continue simmering the red wine until it reduces down until it is syrupy, down to about a Tablespoons worth of liquid and add that to the rest, as well. 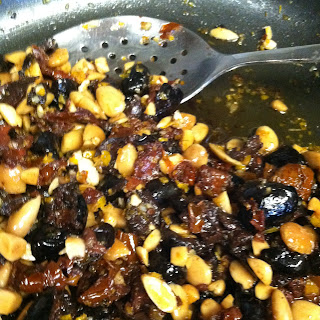 Cook the pasta according to directions until al dente. Drain it, but leave it with some water clinging to it so transfer immediately to a large shallow bowl. Add the sauce, warmed, toss to completely coat the pasta and distribute the ingredients and garnish with the fresh shredded basil leaves. I added a little bit of freshly grated grana padano cheese before tossing it all together. 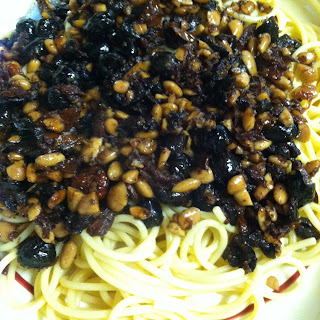 Without the added cheese, this is totally vegan and a hearty dish if you want something with no meat, etc, that is really substantial in flavor. I think this would hold up well with any denser pasta noodle, even smaller shapes like rigatoni or orecchiette.
family italian pasta vegan vegetarian